In 2015, the City Council awarded a contract to Opticos Design, Inc. to build off the effort of ROMA Design Group and prepare implementation language for The Village to be incorporated into the City’s zoning code. A key component of Opticos’ work plan was to facilitate a community design charrette to engage the community and solicit additional input. 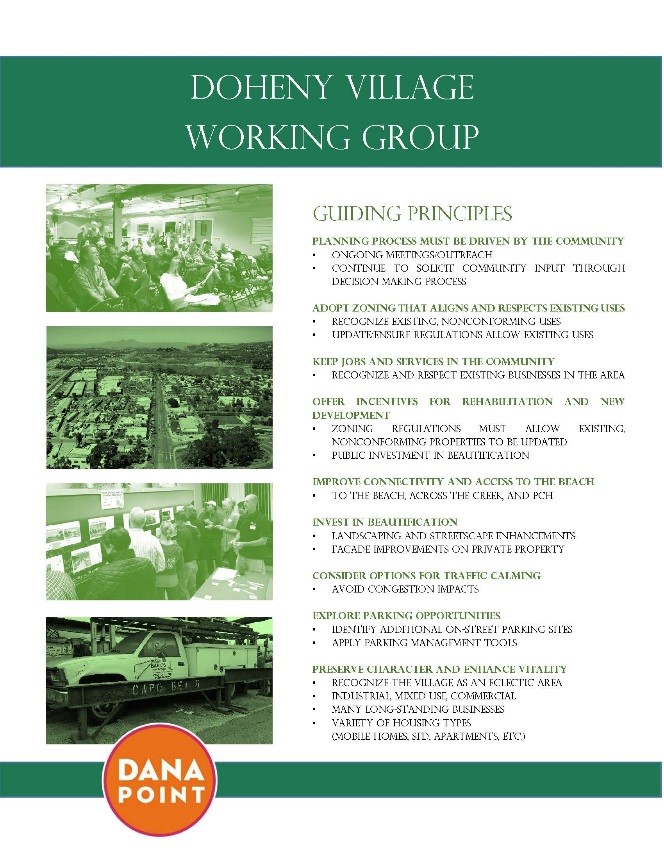 Beginning in October 2017, DVMA and local stakeholders have worked together on a monthly basis with City staff to develop a community-driven plan for the future of The Village.  In the past year, the following short-term goals have been completed:

The Future of the Village: Guiding Principles 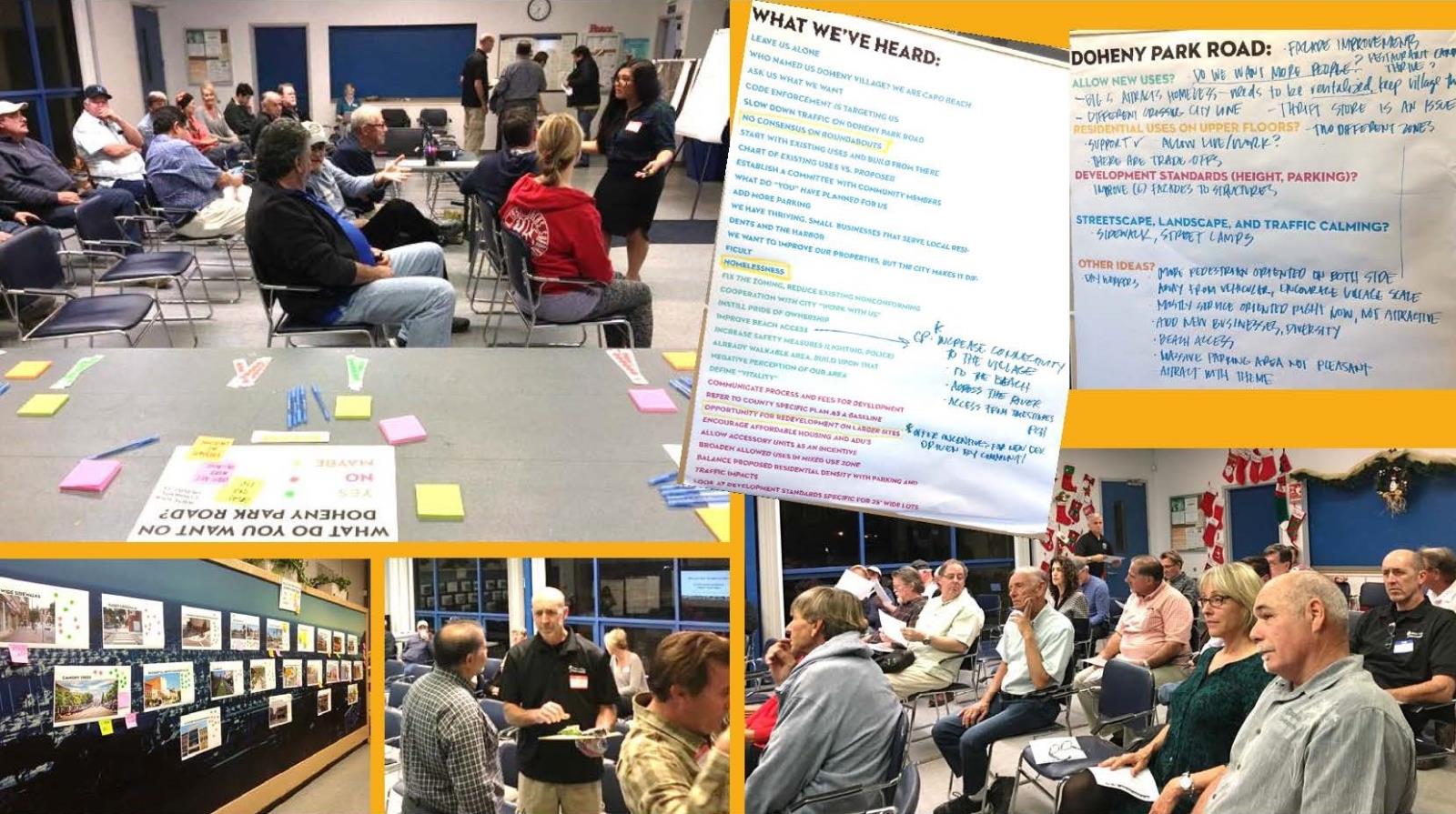 For questions regarding the Doheny Village Plan update, please contact Belinda Deines, Senior Planner, at bdeines@danapoint.org or at (949) 248-3570.

In October 2017, City staff re-initiated a public engagement process to inform, consult, and involve DVMA with a series of monthly meetings which featured interactive presentations and group discussions structured by a citizen partnership model. Meetings focused on challenges and opportunities related to land uses and development standards in The Village, as well as identifying areas of consensus to move forward with the project. Furthermore, City staff facilitated onsite, one-on-one conversations with residents, business owners, and property owners to gain insight on various perspectives and shared interests and concerns. 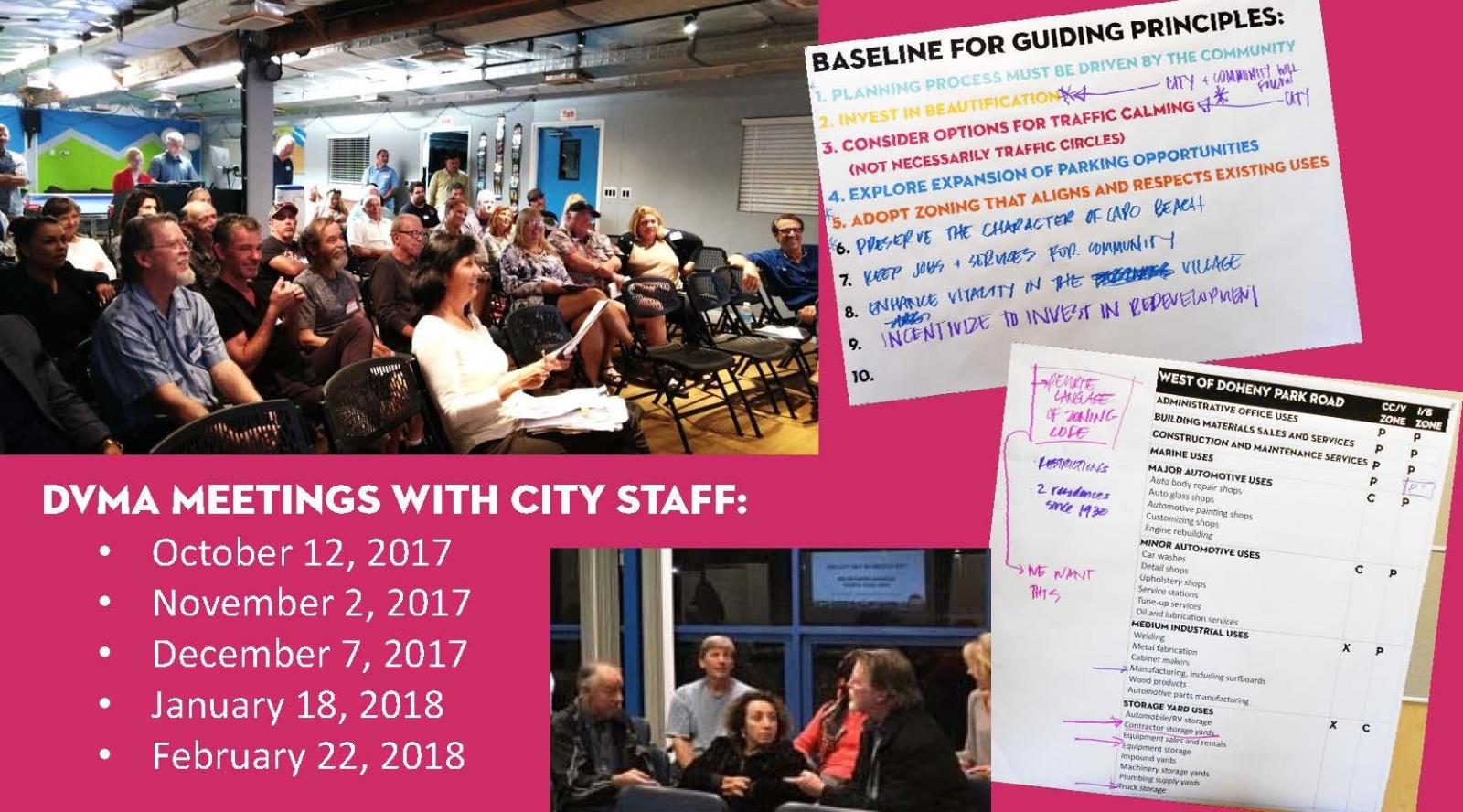 The Doheny Village Working Group consists of select community representatives that have been actively involved in the Draft Zoning Code Update process on a monthly basis with City staff. The group developed an action plan and timeline to achieve long-term goals for the Zoning Code Update, General Plan Amendment, and Beautification Plan.  Working Group meetings are open to the public.

On October 2, 2018, the City Council adopted a zoning code update to allow greater flexibility to expand, improve, and maintain existing, nonconforming structures and uses in Doheny Village.  The majority of structures were built under County of Orange jurisdiction and are 45+ years of age.  As an incentive to encourage property owners to improve their existing properties in the short-term, the zoning code update removes the requirement for a Conditional Use Permit and allows demolition up to 75 percent of the existing structure.  These amendments to the City’s Local Coastal Plan have been submitted to the California Coastal Commission for review and approval.  Once adopted, these provisions are set to expire December 31, 2025.

The Village is a unique, eclectic area with many long-standing industrial, mixed-use, and commercial businesses, as well as a variety of housing types such as multi-family, mobile homes, and live-work units.  Community members have identified three core areas within The Village:

At present, the Working Group is focused on reviewing development standards for each of the three core areas within The Village.  The majority of structures in The Village were developed under the Orange County Zoning Code and Capistrano Beach Specific Plan.  The Group researched how the City’s current zoning code requirements have limited redevelopment of existing properties since 1989.  The Group seeks to draft and adopt flexible standards that are appropriate for the neighborhood.

What are the next steps?

Once the Working Group completes their tasks, City staff will re-initiate environmental review based on the revised documents.  The Zoning Code, General Plan, and Local Coastal Plan amendments will be subject to Planning Commission, City Council, and California Coastal Commission review and approval.

For questions regarding the Doheny Village Plan update, please contact Belinda Deines, Senior Planner, at bdeines@danapoint.org or at (949) 248-3570.