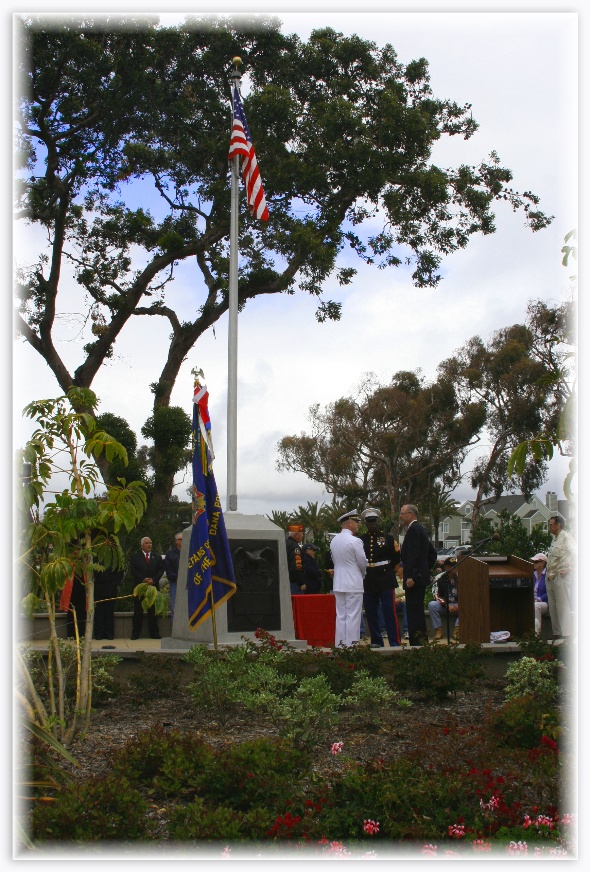 On April 12, 2010 the Veterans Memorial Park was dedicated in Dana Point. Colonel Willard A. Buhl, Commanding Officer of the 5th Marine Regiment, on behalf of Brigadier General L. D. Nicholson, Marine Expeditionary Brigade Commanding General, presented Mayor Steven Weinberg with a certificate that accompanied an American Flag that was flown over Camp Leatherneck in the Helmand Province of Afghanistan on February 21, 2010.

The History of Camp Leatherneck

Camp Leatherneck was officially dedicated on May 29, 2009 as the Marine Expeditionary Brigade – Afghanistan (MEB-A) conducted Transition of Authority with Special Purpose Marine Air/Ground Task Force – Afghanistan (SPMAGTF-A) at the sprawling Marine base in Helmand Province. It is today the home of 6,000 Marines, Sailors, Soldiers and civilians of Task Force Leatherneck. While Marine Combat Forces have been involved with OPERATION ENDURING FREEDOM intermittently since the initial assault into Afghanistan in 2001, an enduring and persistent presence of Marine Forces began only in the summer of 2008. That summer, 2nd BN 7th Marines was assigned to northern Helmand and eastern Farah Provinces while replaced by 3rd BN 8th Marines, and 24 MEU was tasked to clear the Garmsir District of Helmand. 2nd BN 7th Marines was replaced by 3rd BN 8th and 24 MEU was replaced by SPMAGTF-A which was task organized and built around the nucleus of the 3rd Marine Regiment and headquartered at Kandahar Air Field (KAF). MEB-A officially relieved SPMAGTF-A in late May 2009, and the SPMAGTF-A was re-flagged and assumed the duties as RTC-3, the Ground Combat Element (GCE) for the newly arrived MEB and headquartered in Camp Dwyer. In addition to the GCE, today the MEB boasts a robust 65-aircraft Aviation Combat Element, a highly capable Logistics Combat Element that provides full spectrum logistics support to all elements of the MEB, and a Command Element all headquartered at Camp Leatherneck.