Incorporated in 1989, the City of Dana Point is named after Richard Henry Dana Jr. (1815-1882), a Harvard-trained lawyer, seaman, and author of the classic sea journal, Two Years Before the Mast (1840). In his journal, Dana documents his voyage from Boston around Cape Horn to California on the merchant ship, Pilgrim. Therein, Dana describes the area once known as Capistrano Bay, as "the most romantic spot in California." Today, Capistrano Bay is known as Dana Point.

According to the California Department of Finance, Dana Point is home to 34,037 residents, and is characterized by nearly seven miles of prominent coastal bluffs and rolling hills along the Pacific Ocean. The most noteworthy of these bluffs is a unique promontory known as the Headlands, which overlooks Dana Point Harbor, one of the most significant landmarks of the Orange County coastline. 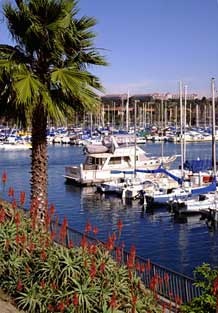 Dana Point Harbor provides slips and mooring for over 2,500 boats along with over 50 specialty shops and restaurants. The Harbor attracts thousands of visitors annually for shopping, sport fishing, walking, bicycling, parasailing and a host of recreational activities. The Dana Point Harbor is also considered the gateway to Doheny State Park, one of California’s most popular beach facilities. The 62-acre State Park offers camping, picnicking, swimming, surfing, bicycling, tide pool exploration and more.

Dana Point provides over 1,900 hotel rooms ranging in accommodations and services from economy to five star hotels. Convention and meeting facilities are available at the larger resort facilities, and all provide access to Dana Point’s unique coastal amenities.

Located in southern Orange County, California, Dana Point is approximately half way between Los Angeles and San Diego, and is bordered by the cities of Laguna Niguel and Laguna Beach to the north, San Juan Capistrano to the east, and San Clemente to the south. Please visit our City Map for more information about our location.